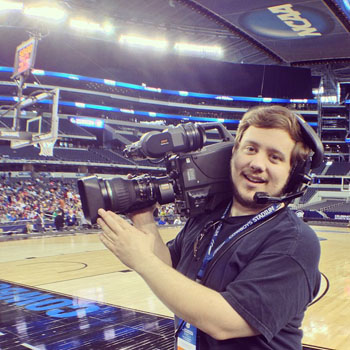 Jim is a Texas native who has been working in many different areas of video production in the Dallas/Fort Worth area for over 10 years. He has been involved with a variety of projects including: corporate web videos, live event videography, short films, commercials, and nationally televised sporting events. Jim can often be spotted down on the sidelines of a sporting event, running a camera, wrangling a video cable, or assisting in the technical set up of a television production.

Some of the organizations that Jim has worked with include: The Dallas Cowboys, WFAA-TV (Dallas), GameStop, The Home Depot, Academy Sports and Outdoors, Boy Scouts of America, 1-800-PET-MEDS, Casual Male, Fox Sports Southwest, NFL Network, ESPN, Turner Sports, MLB Network, Miss Texas USA. Jim has been recognized for his work with awards from The Society of Professional Journalists and an Emmy® from the Texas Chapter of The National Academy of Television Arts.

Jim attended The University of North Texas and earned a Bachelor’s Degree in Radio, Television, and Film. While at North Texas, Jim was the Director of Sports Programming at North Texas Television (NTTV). During his tenure, Jim directed live broadcasts of basketball games, produced a weekly highlight show, produced news segments and anchored on sportscasts.

Jim’s résumé may be viewed here.