A Week of Championship Football

For the very first time, a Super Bowl was hosted in North Texas.  It was only the second to be hosted in the Lone Star State.  With the large capacity of Cowboys Stadium and the storied franchises of the Green Bay Packers and the Pittsburgh Steelers, the NFL expected a Texas-sized event.  As with every Super Bowl, the week leading up to the big game is as big of an event as the game itself.  During that time, media from around the world gather in the host city to watch the teams prepare, as well as observe the slew of former players, celebrities and other dignitaries arriving to watching the big game.

For the week, I was hired by NFL Network to participate on the network shows being presented from the Super Bowl XLV Media Center, in Downtown Dallas.  This included NFL Total Access, The Coaches, and The 2011 Hall of Fame Announcement Show.  Early on in the week, I was with a small crew of video utilities that built up the main set on the first floor of the media center.   Later, we set up the stage, in the second floor ballroom, for The Black Eyed Peas press conference, and we ran video lines to the smaller press conference rooms on the third floor of the building.  On Wednesday and Thursday, NFL Total Access and The Coaches were broadcast from the main set.  During those shows, I worked with the Steadicam operator, as he navigated around the media center looking for bump shots to use in and out of commercial breaks.  On Friday, the crew and I moved all of the cameras and equipment upstairs, to the ballroom, and set up a 10-camera shoot for The 2011 Hall of Fame Announcement Show that was to air Saturday night.  During the Hall of Fame show, I assisted one of the hand-held camera operators, who was getting shots of guests waiting in the green room and Hall of Fame inductees entering the building. 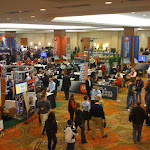 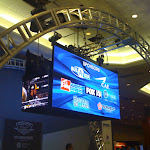 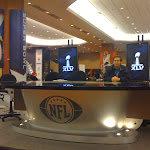 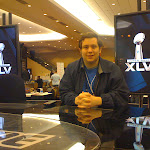 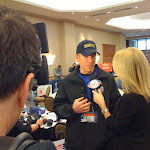 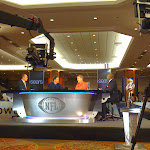 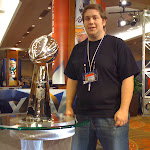 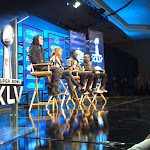 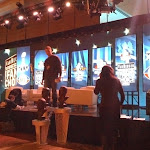